A US Government-Funded Petition to Rewrite Thailand's Constitution

September 22, 2020 (Tony Cartalucci - ATN) - An organization calling itself Internet Law Reform Dialogue or "iLaw" has for over a month now been organizing a petition nationwide at literally every anti-government rally - big or small, at every opposition venue or office headquarters, and at every major university campus calling for the rewriting of Thailand's constitution. 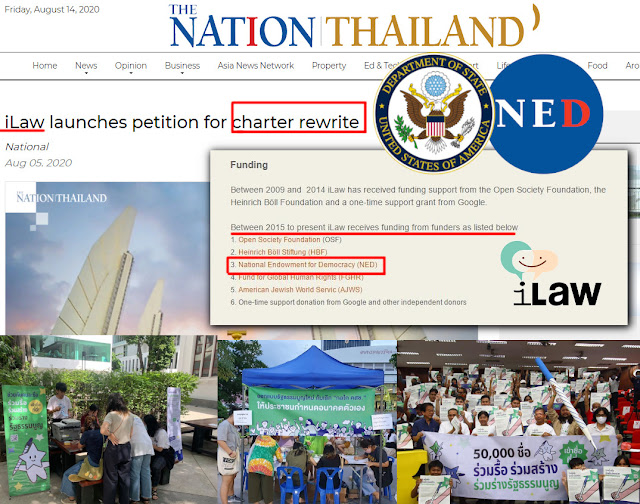 This campaign included a well-funded online marketing campaign along with physical tents and booths with professionally printed banners, brochures, flags, and equipment set up across the entire nation.

Despite this massive month-plus long effort which also included a "mail-in" signature drive, iLaw failed to collect even 100,000 from Thailand's nearly 70 million population by the time the opposition organized its anemic September 19th rally last weekend despite rewriting the constitution being one of the three core demands of so-called "pro-democracy" protesters.

The Internet Dialogue on Law Reform (iLaw) says it will formally present a people’s version of a bill to draft a new constitution to Parliament on Tuesday.

The article claims that the petition was signed by up to 90,000 people by the time of the September 19th rally.

iLaw is considering holding a series of forums to show the public why the 2017 charter — drafted at the behest of the military junta and approved in a referendum where dissent was suppressed — must be rewritten, [iLaw representative] Mr Yingcheep said.

What Bangkok Post and others reporting on iLaw and its petition do not report is the fact that iLaw is funded by US-based corporate foundations and the US government via its notorious regime change arm, the National Endowment for Democracy (NED).

The US NED's own official website lists iLaw as "Internet Law Reform Dialogue" and notes that it receives over 1.5 million Thai Baht a year, claiming:

To foster public understanding and dialogue on the impact of existing and new laws on civil and political rights and to promote freedom of expression. The organization will monitor and assess political and governance processes, as well as the various laws inherited from the military government, and provide the public with accessible analysis of their impact on citizens’ rights. It will also operate a documentation center to monitor and report on freedom of expression violations, and will collaborate with other civil society groups in advocating for democracy and human rights.

iLaw itself admits on its own website that it is funded by the US government via the NED as well as by convicted financial criminal George Soros' Open Society Foundation, stating (emphasis added):

Between 2009 and  2014 iLaw has received funding support from the Open Society Foundation, the Heinrich Böll Foundation and a one-time support grant from Google.

The fact that it is a US government-funded organization helping advance one of the core demands of so-called "pro-democracy" protesters in Thailand - demands echoed by Thailand's corrupt billionaire-led opposition consisting of fugitive Thaksin Shinawatra's Pheu Thai Party and Thanathorn Juangroongruengkit's Move Forward Party - illustrates the foreign-funded nature of the opposition and current unrest it is organizing. 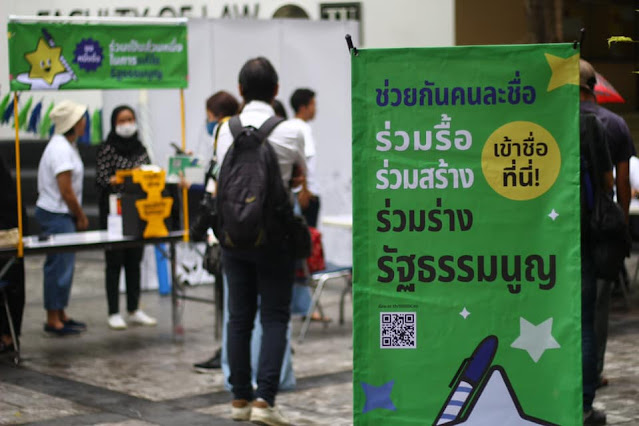 The fact that so few out of Thailand's 70 million population supported the petition despite its central role in ongoing protests also illustrates how unpopular Thailand's current opposition is.
Organizations like iLaw are able to operate specifically because of a Western media along with its local partners never mentioning the foreign-funded nature of their activities. When questions are raised, these same media organizations help iLaw and the US Embassy itself deny political interference.
READ MORE: The Complete Guide: US Government Role in Thailand's "Student Protests"
For the US, its involvement in Thailand's internal affairs stems from Thailand's growing relationship with China and Washington's desire to reverse this by placing into power political groups of its choosing.
China is now Thailand's largest trading partner, investor, source of tourism, arms supplier, and a key partner for major infrastructure projects including a regional high-speed rail network.
What Should Thailand's Response Be?
Were another nation to target America's internal political affairs in a similar manor - funding a group to organize a petition to rewrite the US Constitution and to do so specifically to make it easier for foreign-backed opposition figures to take power - the petition and the organizations promoting it would be fully removed politically and legally - with those involved likely facing jail.
It is difficult to predict how the Thai government will react to a US government-funded petition to rewrite Thailand's own constitution.
Confronting iLaw's US government funding would indirectly mean confronting the United States itself - a course of action Thailand would prefer to avoid in favor of practicing patience as American might wanes globally and Thailand's legal structure carefully chips away at US-backed opposition groups locally.
Peacefully confronting iLaw organizers with a giant printed out image of its US NED funding alongside relevant Thai and international laws regarding political interference, treason, and sedition could work to place iLaw and the rest of the "pro-democracy" opposition's foreign funding and meddling front and center in public debate if not in the middle of government decision-making owed to diplomatic concerns.
Such a move would also expose media organizations who have omitted or outright lied about iLaw's funding consistently for months, rightfully undermining the public's trust in these organizations forward into the future.
Share
‹
›
Home
View web version