Many eager to smear Thai banks and others in relation to the FinCEN Files quickly repeated the ICIJ's accusations. None looked into its Soros and Ford Foundation-funded background, motives, or even the veracity of its supposed claims.

September 23, 2020 (Tony Cartalucci - ATN) - The Bangkok Post in its article, " Thai banks probed over 'dirty money'" made sure to repeat so-far unfounded accusations made against several of Thailand's major banks, based on what the article itself admitted was an "International Consortium of Investigative Journalists' report referring to alleged leaked files from the Financial Crimes Enforcement Network (FinCEN) of the US." 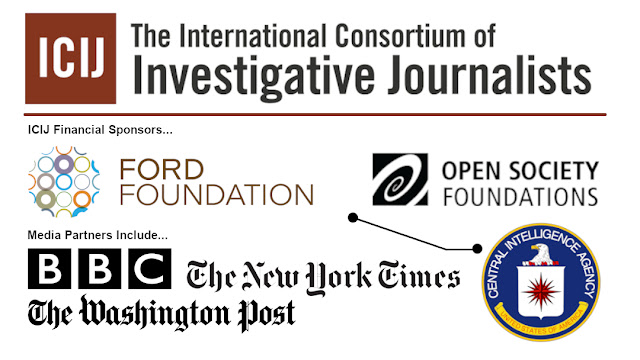 What the Bangkok Post and other anti-government opportunists failed to do was investigate the "International Consortium of Investigative Journalists" (ICIJ) itself, its funding, and thus its possible motives for making its most recent and otherwise baseless accusations.

No Evidence of Criminality, Just Transactions ICIJ Claims are "Suspicious"

The FinCEN Files source documents aren't even fully provided by ICIJ - only an alleged selection picked by ICIJ itself. The alleged data presented on ICIJ's website provides no information about the transactions beside how much money was transferred and from where to where, not even by whom. The handpicked documents released by ICIJ are "Suspicious Activity Reports" or SARs.

A suspicious activity report is a document filed to U.S. authorities when a bank or other financial institution observes a transaction that seems suspicious. A SAR is not an accusation but a way to alert government regulators and law enforcement to irregular or possibly criminal activity. SARs are strictly confidential – so secret that banks aren’t allowed to publicly confirm their existence.

Thus, ICIJ is publishing the names of people and businesses who have not even been accused let alone convicted of any wrongdoing, and simply flagged as "suspicious."

There appears to be claims by the ICIJ - and those repeating its claims - that some banks "turned a blind eye" to allegedly suspicious behavior - but this only means they didn't file SARs with the US government.

Besides creating "leaks" the Western corporate media can now manipulate to smear virtually any state, bank, as well as anyone appearing in disclosed SARs made public by ICIJ, there appears to be little other purpose for ICIJ's "FinCEN Files" project - except perhaps attempting to sell the idea that all banks, worldwide, are accountable to the US government.

Finally, ICIJ links its FinCEN Files project to allegations of Russian interference in the 2016 elections - allegations of interference that after 2 years of investigation were proven baseless - only further undermining ICIJ's credibility and revealing its US-centric agenda.

ICJI's Partners and Sponsors Explain Much

A cursory look at ICIJ's "media partners" reveals what is simply the Western corporate media including British state media outlet the BBC, the New York Times, the Washington Post, CBC Canada, and many more notorious for their role in advancing Western interests around the globe almost entirely in contradiction to actual journalism, fact, or truth.

ICIJ's financial sponsors also read as a "who's who" of Western "soft power." They include convicted financial criminal George Soros' Open Society Foundation and the Ford Foundation - a funding mechanism the US Central Intelligence Agency (CIA) itself admits it has partnered with.

On the CIA's own official website in a post titled, "The Cultural Cold War: The CIA and the World of Arts and Letters ," it admits:

... the CIA worked with existing institutions, such as the Ford Foundation and the Rockefeller Foundation, and established numerous "bogus" foundations to "hide" its funding of the Congress for Cultural Freedom and its other covert activities.

While the passage refers to a specific program the CIA was involved in, the fact that the Ford Foundation willingly abetted the CIA and that it was admitted the US government uses various fronts to hide funding has serious implications regarding ICIJ's current activities.

While some content on ICIJ's website appears to be partial disclosures of information incriminating of Western interets - much of it is not and almost all of it is impossible to verify. This is done to create public confidence and the illusion of legitimacy while in reality ICIJ's main purpose is spreading false information politically beneficial to the United States and its allies. The ICIJ is one of several manufactured Wikileaks counter-operations.

The ICIJ's "investigations" almost exclusively targets of Washington's interests. For example it has a "China Cables" section dedicated to spreading propaganda about China and its security operations in Xinjiang specifically.

Even its "investigation" into money laundering appears to attempt to sell the necessity of strengthening and policing the Wall Street-London dominated global monetary system quickly being circumvented and replaced as more nations seek to overcome growing numbers of US sanctions.

One post on the ICIJ's website even claims, "Global banks defy U.S. crackdowns by serving oligarchs, criminals and terrorists," as if the US isn't the global center of oligarchical criminality and terrorism.

That ICIJ's "report" conveniently comes out and is quickly leveraged against Thailand at the "height" of Thai anti-government protests - whose core leadership and organizations are entirely funded by the US government, Open Society, as well as the Ford Foundation and the Rockefeller Foundation - and just so happens to target major Thai banks is a repeated tactic seen in previous US-backed regime change operations.

That the Bangkok Post and other Western-linked media organizations uncritically reported the ICIJ's claims without even providing basic information to readers about its funding or media partners, only further raises suspicions.

Thailand's response has been to "look into the claims," noting that they are just that - mere claims from allegedly leaked documents originating from within the US government's Financial Crimes Enforcement Network.

Also notably suspicious is that while Julian Assange faces the possibility of life in jail for his role in Wikileaks and exposing Western crimes against humanity, there appears to be no interest at all in finding the source of leaks being supplied to Wikileaks counter-operations like ICIJ whose work solely benefits the West and its many global interventions. In other words, these are most likely not leaks at all, but deliberate disclosures made to appear as leaks, and selected specifically because their timely utility for US interests.