September 21, 2020 (Tony Cartalucci - ATN) - While last weekend's anti-government rally was short on protesters, the overall movement seems to have no shortage of irony. A movement condemning the current Thai government as "fascist" is now openly supporting Nazi-flag waving agitators in Belarus. 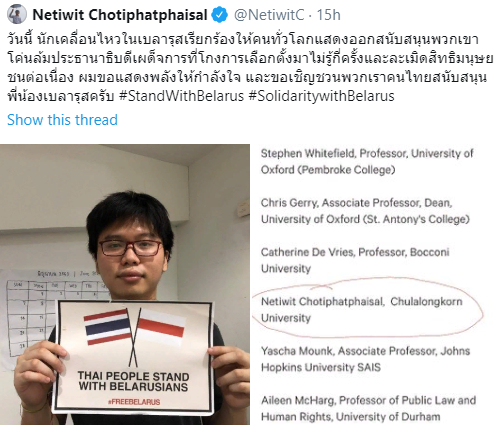 Student protest leader Netiwit Chotiphatphaisal has recently and very proudly come out in support of ongoing anti-government protests in Belarus.

In a picture he himself posted on social media, he holds up a sign with Thailand's national flag alongside - not Belarus' flag - but the flag anti-government protesters have adopted. It is also the identical flag Nazi collaborators flew during World War II.

The Byelorussian Central Council which existed briefly from 1943-1944 flew the same white flag with a single horizontal red mid-stripe.

The invocation of Nazi collaboration by current anti-government protesters in Belarus is no accident or coincidence.

Similarly US-backed protests in Ukraine were also led by Neo-Nazi political parties and militias whose growth after taking power became impossible even for the Western media to conceal any longer.

The US and NATO have, since the end of World War II, used the remnants of Germany's Nazis and their collaborators across Europe against its power struggle with Moscow.

It has been revealed that just like in Thailand, virtually every aspect of Belarus' current opposition is funded and backed by the US government. The US National Endowment for Democracy (NED) on its official website alone lists over 30 organizations or programs it is funding.

While Thailand's "pro-democracy" protesters denounce the current Thai government as "fascist" and "abusive," they themselves are supporting real fascism backed by the most abusive government on Earth.

Worse sill, Thai protesters are invoking Thailand's own fascist past by resurrecting the "People's Party," a right-wing fascist movement that overthrew Thailand's absolute monarchy in 1932 before its leader - a military officer named Pridi Banomyong - fled Thailand with Anglo-American aid and later died in exile while living in France.

Thailand's "pro-democracy" movement, worshiping a fascist military coup 88 years ago, taking US government funds and support today, and now supporting a likewise US-funded protest in Belarus flying the flags of WW2 Nazi collaborators says everything in reality about a Thai movement whose rhetoric attempts to say otherwise.

This isn't the first time Netiwit has supported a US-funded anti-government protest abroad either.

He is a vocal supporter of US-backed sedition in Hong Kong, China. 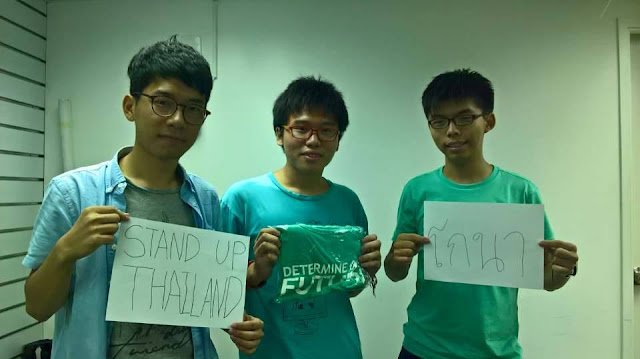 He has flown to Hong Kong and invited US-backed opposition leaders from Hong Kong to Thailand.

Netiwit is also openly anti-China and considers himself part of the "Milk Tea Alliance" - a US State Department propaganda tool attempting to string together an Asian-wide united front against China using local US-funded activists since the actual governments and people of the region refuse to join. 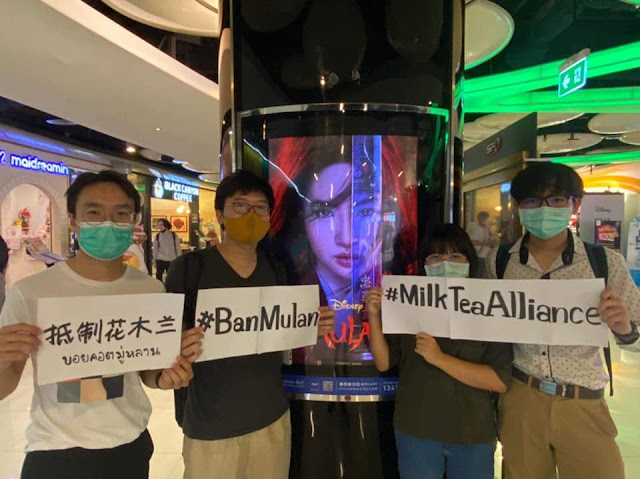 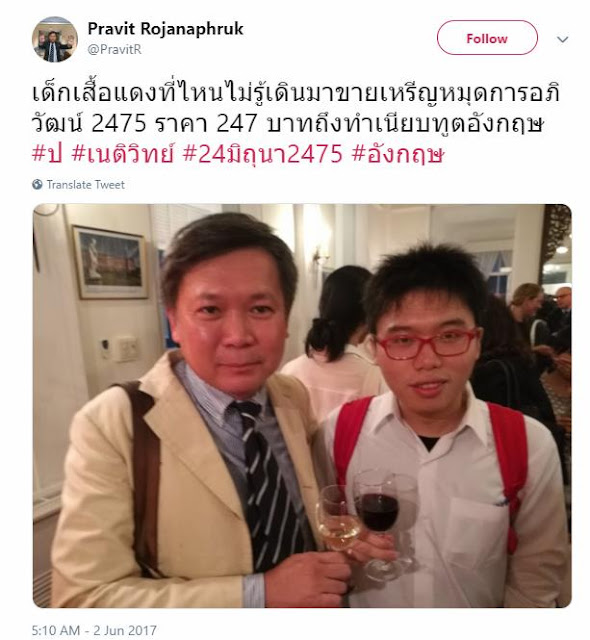 Netiwit has also been invited to the US and British embassies. A picture of him drinking wine inside the British Embassy with Khaosod writer Pravit Rojanaphruk helps further illustrate the level of hypocrisy he and the movement he claims to lead represents.

Netiwit annually protests in front of the Chinese embassy in Bangkok regarding the Tiananmen Square incident - an event that took place long before he was even born. He does this while dining and drinking wine at the British embassy representing a nation currently invading and occupying nations around the globe where it is torturing, abusing, and killing people.

To protest something dishonestly from decades ago while turning a blind eye to ongoing atrocities today Netiwit reveals to the public exactly the sort of "values" Thailand's "pro-democracy" movement really represent.

The protests in Thailand, Hong Kong, or Belarus are about aligning to the West more than to any actual demonstrated set of principles. For Netiwit and his Thai protesters, it is also about undermining Thailand's relationship with China who is currently Thailand's largest trade partner, investor, source of tourism, and arms supplier. It is also a crucial partner for several major infrastructure projects including a region-wide high-speed rail network that will pass through Thailand.

Thailand's "pro-democracy" movement claims it wants to move the nation forward yet it has aligned itself to one of the most abusive and regressive circles of global power - the United States and NATO. By backing US-sponsored political subversion in Hong Kong and Belarus - Netiwit and his movement are also backing the undermining of international law and norms and the peace and stability they were created to protect. They do this to Thailand's and the world's own detriment.