September 3, 2015 (Brandon Turbeville - Activist Post) - Over the past few weeks, Lebanon has found itself embroiled in protests and social unrest the likes of which it has not experienced since 2005. The original issue, legitimate as it may be, surrounded the issue of lack of garbage disposal, yet the protests were soon infiltrated and morphed into an exercise of public rage over shadowy issues like “government corruption.” These protests have gone from peaceful demonstrations to violent clashes between demonstrators and police, with “infiltrators” largely responsible for provocative behavior. 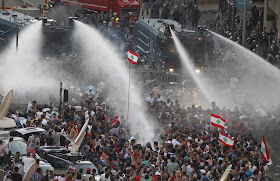 Sectarian tensions are now beginning to surface, a very real fear and dangerous proposition in Lebanon, with members of the “movement” typically resorting to association with tribal identity groups (Christians with Christians, Sunni Muslims with Sunni Muslims, etc.) even during the protests.

As I mentioned in my article, “Color Revolution In Lebanon Designed To Weaken Hezbollah, Syria, Iran,” all of these aspects – shadowy reasons like “government corruption” for protesting, lack of demands, violence, and infiltrators – are hallmarks of a color revolution. So are the clever marketing strategies of “Branding” that see a protest movement, allegedly organic and spread across so many differing and various sectarian groups, develop a mutually agreed upon name for itself so early on.

The most telling aspect of whether or not a movement is actually a color revolution, however, is the “leadership” of that movement and the connections that leadership may have to the color revolution apparatus.

In the case of the You Stink! Movement, those connections are becoming increasingly visible.

Assadd Thebian is represented as one of the leaders of the You Stink! Movement by a number of Western press outlets and, in the Lebanese Press outlet, the Daily Star, he is described as being the “co-founder” of You Stink! Yet, far from being a truly organic Lebanese revolutionary, Thebian is closely connected to the United States Department of State.

Thebian is a participant in the Middle East Partnership Initiative, a program directed by the US State Department for the purposes of directing NGOs in foreign countries in order to facilitate US foreign policy. In other words, the MEPI is yet another program and initiative in the color revolution apparatus.

MEPI was created in December 2002 by the State Department. Its creation was announced in a speech by Secretary of State Colin Powellto the Heritage Foundation in Washington D.C. Powell stated that MEPI was an initiative that was to bear fruit over the long term, not merely 3-5 years. It was created to help pick up the slack in areas where USAID was not able to fully service. Although it was initially dependent upon USAID for support, MEPI has taken off on its own as a formidable color revolution organization.

The same year as its creation, Liz Cheney, daughter of Dick Cheney, was appointed as supervisor of MEPI per her position as U.S. Deputy Assistant Secretary For Near Eastern Affairs. Under Cheney’s direction, MEPI engaged in teaching methods designed to “train Arab journalists” and “teach children,” presumably in the benefits of US Foreign Policy as well as encourage nations within MEPI’s sphere of influence to sign various Free Trade agreements with the United States and move toward a Middle Eastern Free Trade Zone.

A year later in 2003, MEPI announced that it was going to engage in a “detoxification” program designed to improve Palestinian and other Arab countries’ presentation of Israelis in textbooks.

In 2015, MEPI’s main task is to support and “increase the capacity of civil society organizations” meaning NGOs operating in the countries under its purview. As Foreign Policy describes MEPI, it is “a $150 million program to advance democracy in the Middle East, which promotes programs for female literacy and health, as well as business and political training, as a model for more activist, pro-women policies in other parts of the world.”

Of course, “democracy” should be placed in square quotes. “Democracy” as promoted by MEPI and the West is nothing short of imperialism and Anglo-American domination. Notice also that the “pro-woman” aspect of MEPI is designed to promote “activist” policies amongst women, meaning MEPI is in the business of culture creation at best and social upheaval at worst. MEPI’s focus is not just women, of course, but “youth” in general.

MEPI states on its own website that “MEPI supports organizations and individuals in their efforts to promote political, economic, and social reform in the Middle East and North Africa.”

MEPI’s alumni boast of a number of political figures in the Middle East and a number of individuals also associated with the National Democratic Institute (NDI), a notorious color revolution and destabilization organization connected to the NED and the State Department.

MEPI is precisely the program in which Thebian is an alumni, having given a speech at the MEPI Lebanese Alumni Association Annual Dinner in January 2014.

It is worth noting that, when Thebian was sued by Lebanese member of parliament, Ziad Aswad, for “defamation and contempt of religion,” a number of NGOs rushed to Thebian’s defense. Of these NGOs, theSamir Kassir Eyes Foundation boasts of connections to both the NDI and the NED. Another, Maharat Foundation, received $30,000 from the NED’s Freedom of Information program. Another operation, The March Foundation, is funded by USAID.

Other leaders are just as openly involved in the color revolution apparatus as Thebian. Michel Elefteriades, for instance, was a participant in the 2005 Cedar Revolution and a “key militant at Martyr’s Square.” Elefteriades states that the You Stink! Movement is not just another color revolution but, in the same breath, admits that the goal of the movement is full of anarchic elements, a push for decentralization, and an intention to collapse the system of government. Elefteriades makes no mention of what should be put in place of the existing order and it appears that not a single activist on the ground is able to do so either.

There is an awakening of democratic awareness, and it has been a very long time since Lebanon has not come out of these political parties and religious sects to ask that all political leaders be punished or sidelined.[…]

It’s a sort of popular revolution, a mix of many movements – some anarchic in the good philosophical sense such as the refusal of the centralised power – it’s really a grassroots movement so I don’t think its going to stop. The movement will grow.

The goal of the protests, he says is “To bring the collapse of a system that has been in place for decades.” He blames the crisis on a “rotten political class” and the use of “confessionalism” as a governing structure.

While it must be admitted that confessionalism, a form of government where parliamentary seats and political offices are proportioned out according to religious demographics in the country, is an incredibly inefficient and undemocratic way to govern a country, the governing structure exists as a result of intense Western meddling in the internal affairs of Lebanon by the West and by members of the general public so obstinate in their own religious beliefs that they often insist on governance based on that particular religion. It is a fragile government designed to maintain the fragile fabric of a fragile society.

The answer, of course, is to keep religion out of politics and promote a secular government that respects the rights of all. But Elefteriades does not demand such a government, only the destruction of the one currently standing.

Lucien Bourjeily, is also hailed as a leading figure in the You Stink! Movement. Bourjeily, however, has long ago revealed himself as a supporter of Western backed destabilization and destruction of sovereign countries by his “66 Minutes In Damascus,” a strange interactive theatre play that transformed the theatre into a “Syrian prison” and the audience into “prisoners.” The goal of the play was to drum up hatred against the “totalitarian” Assad regime and promote the “moderate rebels” who beheaded, murdered, and raped their way across Syria in search of “democracy and freedom.”

Not only that but Bourjeily himself is directly connected to the color revolution apparatus as his own play, “Will It Pass Or Not?” was produced by March, a Lebanese NGO whose partner is USAID.

Laughably, Walid Jumblatt is expressing support for the You Stink! Movement, criticizing the movement’s critics and expressing support for the movement while, at the same time, doing little to address the legitimate issues which begat the initial protests. If any Lebanese politician truly exhibited the term “You Stink!” it would be Jumblatt. It must be remembered that it was Jumblatt who extolled the virtues of the Syrian destabilization, demonized Assad, and has continually justified and praised al-Nusra.

Aside from a number of high-profile activist “leaders,” Andre Vltchek of CounterPunch reveals foreign NGO involvement in the YouStink! Movement as well. Vltchek writes:

Two weeks ago, a friend of mine said jokingly: “I met a kid in Beirut. He told me that he is going to get a job at some European NGO. His duty would be to help to destabilize Lebanon”.

She named the country funding the NGO, but I’d rather not mention it here, in order not to add more oil to fire. We had a good laugh then, but it does not appear too funny, anymore.

Yesterday she told me: “Security forces fired at him.”

He was there. He was not bragging. It was not a joke.

Unfortunately, Vltchek declined to mention the country from which this NGO is funded. However, paragraphs later, we may find a clue. Vltchek states:

Demands appear to be legitimate.

But in Lebanon, one cannot be certain of what lies below the surface. There are rumors that each religious group is now sending its fighters to the barricades.

For years and decades, competing political interests are pulling this tiny country in different directions.

“I spotted a guy who was protesting and who was obviously a British”, a diplomat based in Beirut who did not want to be identified, told me. “He was not a reporter, he was actually one of the protesters! And he spoke no Arabic. There are many bizarre characters at the protests.”

Who is who and who is with whom, is often extremely difficult to define.

While the You Stink! Movement initially seemed to exhibit many of the characteristics of a color revolution, the nature of the protests are even clearer after examining the individuals participating and directing the protests on the ground.

It remains to be seen how far the color revolution will go in Lebanon. After all, the previous attempt in Lebanon in 2005 was successful. Only time will tell whether or not the West will succeed in bringing Lebanon down into levels of chaos and terror currently being witnessed Syria. For the sake of the Lebanese people and the people of the Middle East we must hope that rational actors will appear and put an end to the apparently Western-backed chaos taking place across the country.
Share
‹
›
Home
View web version