February 28, 2020 (Tony Cartalucci - NEO) - Turkey has allegedly lost another 33 troops in Syria this week amid its refusal to withdraw from Syrian territory amid Syrian government gains in the northern governorate of Idlib. 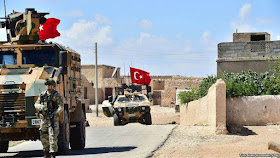 The BBC in its article, "Syria war: 33 Turkish troops killed in air strike in Idlib," would report:


At least 33 Turkish soldiers have been killed in an air strike by Syrian "regime forces" in north-western Syria, a senior Turkish official has said.

The US-led proxy war against Syria is all but over. It is just a matter of time before Damascus and its allies restore control over the entire nation and begin rebuilding.

The US-armed and funded terrorists that have ravaged the country since 2011 have been exposed, depleted, and cornered. So desperate is the state of this proxy war that in recent years the US and its allies including Turkey and Israel have resorted increasingly to direct military action against Damascus itself as their proxies are no longer capable of carrying out sustained military operations themselves.

And despite brazen aggression against Damascus and its forces - the combined military might of the US, Turkey, and Israel have failed to produce any noteworthy or sustainable gains in contrast to Damascus' imminent victory.

Giving Up a Graceful Exit

Turkey has been a NATO member since the 1950's and was an eager participant in Washington's proxy war on Syria allowing its territory and resources to be used to flood Syria with terrorists, weapons, equipment, and money to fuel the destructive 9 year conflict.

Despite Turkey's integral role in facilitating Washington's malice and destructive proxy war, Syria's allies - seeing the conflict as ending in Damascus' favor - attempted to create a graceful exit for Turkey and the possibility of playing a more constructive role in the region they - not Washington - would now be shaping.

This included economic and military ties with Russia and Iran to help ease pressure from Washington who was attempting to cut both to punish and increasingly uncompliant Ankara.

However, recent events appear to indicate that Turkey has rejected this graceful exit. Turkish forces find themselves increasingly escalating directly against Syrian forces and now even their nuclear-armed Russian allies.

Nothing Turkey can do short of total war in northern Syria will reverse their flagging fortunes.

Discovering whatever Ankara is still being promised - or threatened with - by Washington to continue its policy of belligerence and disruption in northern Syria will be key to dissuading Turkish cooperation with the US - or formulating a strategy to frustrate and defeat the lingering machinations of Washington and its two chief partners - Turkey and Israel.

Turkey now finds itself in the unenviable position of having all but abandoned promising ties with the winners of the Syrian conflict and a constructive role in reorganizing the region in the conflict's aftermath - and now also doubling down on a clearly lost war that will cost Turkey not only blood and treasure, but also its standing in the region in the near to intermediate future.
Share
‹
›
Home
View web version