...the Syrian authorities’ violations at Saydnaya amount to crimes against humanity. Amnesty International urgently calls for an independent and impartial investigation into crimes committed at Saydnaya.

However, even at a cursory glance, before even reading the full body of the report, under a section  titled, "Methodology," Amnesty International admits it has no physical evidence whatsoever to substantiate what are admittedly only the testimony of alleged inmates and former workers at the prison, as well as figures within Syria's opposition.


Within the section titled, "Methodology," the report admits:

In other words, Amnesty International had no access whatsoever to the prison, nor did any of the witnesses it allegedly interview provide relevant evidence taken from or near the prison.

The only photographs of the prison are taken from outer space via satellite imagery. The only other photos included in the report are of three men who allege they lost weight while imprisoned and a photo of one of eight alleged death certificates provided to family members of detainees who died at Saydnaya.

The alleged certificates admittedly reveal nothing regarding allegations of torture or execution.


There are almost no pictures of its exterior [except satellite images] and none from inside. And what happens within its walls is cloaked in secrecy, until now.

Viewers are initially led to believe evidence has emerged, exposing what took place within the prison's walls, but the narrator continues by explaining:


We've devised a unique way of revealing what life is like inside a torture prison. And we've done it by talking to people who were there and have survived its horrors...

...and using their recollections and the testimony of others, we've build an interactive 3D model which can take you for the first time inside Saydnaya.

The narrator then explains:


In a unique collaboration, Amnesty International has teamed up with "Forensic Architecture" of Goldsmiths, University of London, to reconstruct both the sound and architecture of Saydnaya prison, and to do it using cutting-edge digital technology to create a model.

In other words, the summation of Amnesty International's presentation was not accumulated from facts and evidence collected in Syria, but instead fabricated entirely in London using 3D models, animations, and audio software, based on the admittedly baseless accounts of alleged witnesses who claim to have been in or otherwise associated with the prison. 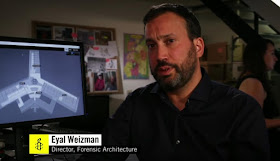 Eyal Weizman, director of "Forensic Architecture," would admit that "memory" alone was the basis of both his collaboration with Amnesty International, and thus, the basis for Amnesty's 48 page report:


Memory is the only resource within which we can start [to] reconstruct what has taken place. What does it feel like to be a prisoner in Saydnaya?

Weizman's organization, "Forensic Architecture," on its own website, describes its activities:


Forensic Architecture is a research agency based at Goldsmiths, University of London. It includes a team of architects, scholars, filmmakers, designers, lawyers and scientists to undertake research that gathers and presents spatial analysis in legal and political forums.

We provide evidence for international prosecution teams, political organisations, NGOs, and the United Nations in various processes worldwide. Additionally, the agency undertakes historical and theoretical examinations of the history and present status of forensic practices in articulating notions of public truth.

In other words, special effects experts and their tools - usually employed in the creation of fictional movies for the entertainment industry or for architectural firms to propose yet-to-exist projects - are now being employed to fabricate evidence in a political context when none in reality exists.

While the work of "Forensic Architecture" may be of interest to developing theories, it is by no means useful in providing actual evidence - evidence being understood as an actual available body of facts or information indicating whether a belief or proposition is true or valid - not a fabricated body of supposed facts or information.

The work of "Forensic Architecture" and the witness accounts gathered by Amnesty International - all of which were admittedly gathered outside of Syria - would form the basis of an initial inquiry, not a final report nor the basis of a conclusion that human rights violations not only took place, but that they constituted crimes against humanity and demanded immediate international recourse.

Amnesty International's report lacked any actual evidence, with its presentation consisting instead of admittedly fabricated images, sounds, maps, and diagrams. Amnesty - lacking actual evidence - instead abused its reputation and the techniques of classical deception to target and manipulate audiences emotionally. What Amnesty International is engaged in is not "human rights advocacy," but rather politically-motivated war propaganda simply hiding behind such advocacy.

Exposing this technique of openly and shamelessly fabricating the summation of an internationally released report - promoted unquestioningly by prominent Western papers and media platforms, including the BBC, CNN, the Independent, and others - prevents Amnesty and other organizations like it from continuing to use the trappings of science and engineering as cover to deliver monstrous lies to the public.
Share
‹
›
Home
View web version