November 14, 2015 (Tony Cartalucci - LD) - As predicted and previously reported, terrorists who took part in an unprecedented attack in the center of Paris killing over a 100 and injuring hundreds more, were well-known to French security agencies before the attack took place. 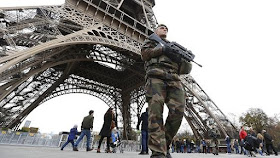 The UK Daily Mail reported in its article, "Hunt for the Isis killers: One terrorist identified as 'young Frenchman known to authorities' - another two found with Syrian and Egyptian passports," that:


One of the terrorists involved in last night's attacks in Paris has been officially identified as a Parisian, according to local media reports.

The man, who was killed at the Bataclan, was identified using his fingerprints and was from the southern Parisian neighbourhood of Courcouronnes.

French reports say that the man, who was around 30 years old, was already known to French anti-terrorist authorities prior to last night's attacks.

Similarly in January 2015 in the wake of the "Charlie Hebo attack" which left 12 dead, it was revealed that French security agencies tracked the perpetrators for nearly a decade beforehand, having arrested at least one terrorist a total of two times, incarcerating him at least once, tracked two of them overseas where they had trained with known terrorist organizations and possibly fought alongside them in Syria, before tracking them back to French territory.

Astoundingly, French security agencies never moved in on the terrorists, claiming that after a decade of tracking them, they had finally decided to close their case for precisely the amount of time needed for them to plan and execute their grand finale.


More Wars and More Surveillance Can't Help
With a similar scenario now emerging, particularly in the wake of the "Charlie Hebo attack," where French security agencies knew about extremists but failed to stop them before carrying out yet another high-profile attack, even with enhanced surveillance powers granted to them by recent legislation, it appears that no amount of intrusive surveillance or foreign wars will stem a terrorist problem the French government itself seems intent on doing nothing to stop.

ISIS is Behind the Paris Attacks, But Who is Behind ISIS?

With the so-called "Islamic State" (ISIS) emerging as being behind the attack, the question that remains is, who is behind ISIS itself? While the West has attempted to maintain the terrorist organization possesses almost mythological abilities, capable of sustaining combat operations against Syria, Iraq, Lebanon's Hezbollah, support from Iran, and now the Russian military - all while carrying out large-scale, high-profile terrorist attacks across the globe - it is clear that ISIS is the recipient of immense multinational state-sponsorship.

The rise of ISIS was revealed as early as 2007 in interviews conducted by Pulitzer Prize-winning journalist Seymour Hersh in his 9-page report "The Redirection." The interviews revealed a plan to destabilize and overthrow the government of Syria through the use of sectarian extremists - more specifically, Al Qaeda - with arms and funds laundered through America's oldest and stanchest regional ally, Saudi Arabia.


If the situation unravels there is the possibility of establishing a declared or undeclared Salafist principality in eastern Syria (Hasaka and Der Zor), and this is exactly what the supporting powers to the opposition want, in order to isolate the Syrian regime, which is considered the strategic depth of the Shia expansion (Iraq and Iran).

The DIA report enumerates precisely who these "supporting powers" are:


The West, Gulf countries, and Turkey support the opposition; while Russia, China, and Iran support the regime.

And to this day, by simply looking at any number of maps detailing territory held by various factions amid the Syrian conflict, it is clear that ISIS is not a "state" of any kind, but an ongoing invasion emanating from NATO-member Turkey's territory, with its primary supply corridor crossing the Turkish-Syrian border between the Syrian town of Ad Dana and the western bank of the Euphrates River, a supply corridor now increasingly shrinking.

In fact, the desperation exhibited by the West and its efforts to oust the Syrian government and salvage its proxy force now being decimated by joint Syrian-Russian military operations, is directly proportional to the diminishing size and stability of this corridor.

Just last week, Syrian forces reestablished firm control over the Kweyris military airport, which was under siege for years. The airport is just 20 miles from the Euphrates, and, as Syrian forces backed by Russian airpower work their way up toward the Turkish border along the Syrian coast, constitutes a unified front that will essentially cut off ISIS deeper inside Syria for good.

Should ISIS' supply lines be cut in the north, the organization's otherwise inexplicable fighting capacity will atrophy. The window for the West's "regime change" opportunity is quickly closing, and perhaps in a last ditch effort, France has jammed the spilled blood and broken bodies of its own citizens beneath the window to prevent it from closing for good.

The reality is that France knew the "Charlie Hebo" attackers, they knew beforehand those involved in the most recent Paris attack, and they likely know of more waiting for their own opportunity to strike. With this knowledge, they stood by and did nothing. What's more, it appears that instead of keeping France safe, the French government has chosen to use this knowledge as a weapon in and of itself against the perception of its own people, to advance its geopolitical agenda abroad.

If the people of France want to strike hard at those responsible for repeated terrorist attacks within their borders, they can start with those who knew of the attacks and did nothing to stop them, who are also, coincidentally, the same people who helped give rise to ISIS and help perpetuate it to this very day.
Share
‹
›
Home
View web version