US Seeks Occupation as US Fighters Flood Syria

US policy paper called for the occupation of northern Syria with special operations forces. Now Foreign Policy reports northern Syria is being flooded by "volunteers" from America.

September 8, 2015 (Tony Cartalucci - NEO) - US corporate-funded policy think-tank, the Brookings Institution, published a June 2015 paper titled, "Deconstructing Syria: Towards a regionalized strategy for a confederal country." The signed and dated open-conspiracy to divide, destroy, invade, then incrementally occupy Syria using no-fly-zones and both US and British special forces is now demonstrably underway. 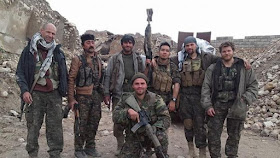 The paper would lay out in no uncertain terms that (emphasis added):

The idea would be to help moderate elements establish reliable safe zones within Syria once they were able. American, as well as Saudi and Turkish and British and Jordanian and other Arab forces would act in support, not only from the air but eventually on the ground via the presence of special forces as well. The approach would benefit from Syria’s open desert terrain which could allow creation of buffer zones that could be monitored for possible signs of enemy attack through a combination of technologies, patrols, and other methods that outside special forces could help Syrian local fighters set up.

Were Assad foolish enough to challenge these zones, even if he somehow forced the withdrawal of the outside special forces, he would be likely to lose his air power in ensuing retaliatory strikes by outside forces, depriving his military of one of its few advantages over ISIL. Thus, he would be unlikely to do this.


Not only does Brookings lay out an open conspiracy to invade and occupy Syria, it does so with the open admission that the goal is not to degrade the fighting capacity of the so-called "Islamic State" (ISIS or ISIL), but rather to undermine and eventually overthrow the Syrian government. In fact, Brookings makes a point of stating that the goal would be to seize and hold Syrian territory to further advance American ambitions toward regime change, and would move quickly to degrade the Syrian government's ability to resist ISIS if any attempts were made by Damascus to stop the US invasion.

News reports have trickled out regarding US and British "fighters" operating in Syria. Their backgrounds, affiliations, logistical support, and transportation to the battlefield have been intentionally left ambiguous by the Western media. Occasionally, open admissions are made that US and British special forces are operating in Syria, with one recent report indicating British Special Air Service (SAS) operators were in Syria "dressed as ISIS fighters." The UK Express reported in their article, "SAS dress as ISIS fighters in undercover war on jihadis," that:


The unorthodox tactic, which is seeing SAS units dressed in black and flying ISIS flags, has been likened to the methods used by the Long Range Desert Group against Rommel's forces during the Second World War.

More than 120 members belonging to the elite regiment are currently in the war-torn country on operation Shader, tasked with destroying IS equipment and munitions which insurgents constantly move to avoid Coalition air strikes.


Of course, this alleged and very risky military operation to "destroy IS equipment and munitions" in Syria begs belief as all of ISIS' equip first enters Syria at the very Turkish-Syrian border the SAS likely staged to begin their operation. Strategically and tactically, interdicting ISIS' supplies before they reach Syria would effectively cripple ISIS' fighting capacity in the matter of weeks. It is clear that the SAS and other Western special forces are not in Syria to fight ISIS, but as Brookings itself admits, to take and hold Syrian territory from which terrorist groups, including ISIS can more safely wage war against Damascus.


As the number of US and British forces on the ground in Syria grow, a variety of cover stories have been invented. The latest has been posited by Foreign Policy magazine. In their report titled, "Meet the Americans Flocking to Iraq and Syria to Fight the Islamic State," they claim:

...the number of Americans traveling abroad to fight the Islamic State is picking up, with 44 percent of all fighters identified in the report arriving between May and mid-August of 2015. Whether you think of them as brave patriots stepping up to oppose a pressing threat or meddlesome war tourists taking foolish risks, one thing seems certain: More Americans will be arriving in Iraq and Syria to take up the fight against the Islamic State in the near future.

The anecdotes used to qualify Foreign Policy's claims that these fighters are "volunteers" and not special forces or paid mercenaries are the clearest indication that the article, and many like it, are a cover story. Ironically, it would be one of Cass Sunstein's "independent credible voices," Eliot Higgins - who regularly claims Russian volunteers in Ukraine are in fact sanctioned by Moscow - who would publish a "report" supporting Foreign Policy's "volunteer" premise.

In reality, Foreign Policy is covering up the immediate implementation of admitted and documented US foreign policy to invade and occupy Syrian territory using special forces. A growing number of US and British special forces in Syria to take and hold territory will be impossible to cover up perpetually, so alternative narratives explaining the large and growing numbers of Western fighters in Syria has been fabricated.

And while the prospect of volunteers travelling to Syria is not entirely fantastical, the transportation, funding, arming, and both tactical and political support of these fighters requires state resources. The fact that American citizens are forbidden by law to partake in foreign conflicts in this manner, yet are able to freely enter Turkey, then cross at Turkish-controlled checkpoints to fight in Syria - like the flow of weapons, supplies, and fighters to bolster ISIS at these same checkpoints - suggests stated US foreign policy to both use armed terrorist groups to overthrow the Syrian government by proxy, and now the use of US and British military forces to do so directly, is being executed before the eyes of the world.