February 12, 2012 - AP reported that US General Martin Dempsey has met directly with the military leaders of Egypt to discuss an Egyptian "crackdown on Western-funded pro-democracy groups." Threatened with a cut-off from US aid, the Egyptian military is expected to abandon their campaign against US "NGOs."

As usual, AP attempts to diminish the veracity of Egypt's concerns with deceptive language and innuendos such as, "Egypt, which regularly blames anti-military protests on foreign meddling," and "in an indication that authorities will continue to push the line that foreigners are stirring up trouble." Of course it is not a "line" that the Egyptian government is pushing, it is a well documented fact. 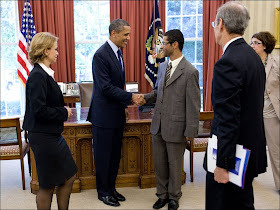 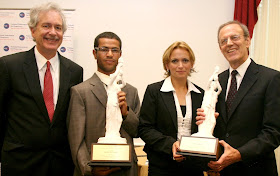 Images: From Tunis and Tahrir Square to the Oval Office shaking hands with the US President and receiving the NED 2011 "Democracy Award," the forces behind the "Arab Spring" not only weren't spontaneous nor indigenous, but they most certainly were orchestrated, funded, directed, and finally celebrated and well-rewarded by the US State Department through their National Endowment for Democracy. Egypt's crackdown on these disingenuous NGOs is long overdue and an example for all nations to follow.
....
AP goes on to explain the plight of the International Republican Institute (IRI) Egypt office-head, Sam LaHood, son of US Transportation Secretary Ray LaHood, who is now on trail amongst 16 American "civil society employees." They are charged with using US State Department funds to fuel unrest throughout Egypt.

Despite the feigned skepticism of AP, there is conclusive evidence that from 2008, the US State Department had begun a concerted effort to recruit, train, equip, fund, and in some cases arm, dissidents not only from Egypt, but from Tunisia, Libya, Syria, Iran, Russia, Belarus, Myanmar, Malaysia, Thailand, and even North Korea. This was accomplished not only through the US State Department, but through a myriad of subsidiaries starting with the National Endowment for Democracy (NED) and including LaHood's IRI.

Far from Egyptian Paranoia - Documented US Meddling in Egypt

In January of 2011, we were told that "spontaneous," "indigenous" uprising had begun sweeping North Africa and the Middle East, including Hosni Mubarak's Egypt, in what was hailed as the "Arab Spring." It would be almost four months before the corporate-media would admit that the US had been behind the uprisings and that they were anything but "spontaneous," or "indigenous." In an April 2011 article published by the New York Times titled, "U.S. Groups Helped Nurture Arab Uprisings," it was stated (emphasis added):

"A number of the groups and individuals directly involved in the revolts and reforms sweeping the region, including the April 6 Youth Movement in Egypt, the Bahrain Center for Human Rights and grass-roots activists like Entsar Qadhi, a youth leader in Yemen, received training and financing from groups like the International Republican Institute, the National Democratic Institute and Freedom House, a nonprofit human rights organization based in Washington."

The article would also add, regarding the US National Endowment for Democracy (NED):

"The Republican and Democratic institutes are loosely affiliated with the Republican and Democratic Parties. They were created by Congress and are financed through the National Endowment for Democracy, which was set up in 1983 to channel grants for promoting democracy in developing nations. The National Endowment receives about $100 million annually from Congress. Freedom House also gets the bulk of its money from the American government, mainly from the State Department. "

It is hardly a speculative theory then, that the uprisings were part of an immense geopolitical campaign conceived in the West and carried out through its proxies with the assistance of disingenuous organizations including NED, NDI, LaHood's IRI, and Freedom House and the stable of NGOs they maintain throughout the world. Preparations for the "Arab Spring" began not as unrest had already begun, but years before the first "fist" was raised, and within seminar rooms in D.C. and New York, US-funded training facilities in Serbia, and camps held in neighboring countries, not within the Arab World itself.

In 2008, Egyptian activists from the now infamous April 6 movement were in New York City for the inaugural Alliance of Youth Movements (AYM) summit, also known as Movements.org. There, they received training, networking opportunities, and support from AYM's various corporate and US governmental sponsors, including the US State Department itself. The AYM 2008 summit report (page 3 of .pdf) states that the Under Secretary of State for Public Diplomacy and Public Affairs, James Glassman attended, as did Jared C0hen who sits on the policy planning staff of the Office of the Secretary of State. Six other State Department staff members and advisers would also attend the summit along with an immense list of corporate, media, and institutional representatives.

Shortly afterward, April 6 would travel to Serbia to train under US-funded CANVAS, formally the US-funded NGO "Otpor" who helped overthrow the government of Serbia in 2000. Otpor, the New York Times would report, was a "well-oiled movement backed by several million dollars from the United States." After its success it would change its name to CANVAS and begin training activists to be used in other US-backed regime change operations.

The April 6 Movement, after training with CANVAS, would return to Egypt in 2010, a full year before the "Arab Spring," along with UN IAEA Chief Mohammed ElBaradei. April 6 members would even be arrested while waiting for ElBaradei's arrival at Cairo's airport in mid-February. Already, ElBaradei, as early as 2010, announced his intentions of running for president in the 2011 elections. Together with April 6, Wael Ghonim of Google, and a coalition of other opposition parties, ElBaradei assembled his "National Front for Change" and began preparing for the coming "Arab Spring."

Quite clearly, it is not a "line" that the Egyptian government is "pushing" in regards to so-called "civil society employees," rather it is a verified, documented fact that these "employees" are conducting espionage and political destabilization under the increasingly tenuous guise of "democracy promotion."

Video: The Revolution Business. The revolutions are fake, the people behind them illegitimate.
....
An April 2011 AFP report would confirm that the US government had trained armies of "activists" to return to their respective countries and enact political "change," when US State Department's Michael Posner stated that the "US government has budgeted $50 million in the last two years to develop new technologies to help activists protect themselves from arrest and prosecution by authoritarian governments." The report went on to explain that the US "organized training sessions for 5,000 activists in different parts of the world. A session held in the Middle East about six weeks ago gathered activists from Tunisia, Egypt, Syria and Lebanon who returned to their countries with the aim of training their colleagues there." Posner would add, "They went back and there's a ripple effect."

That ripple effect of course, was the "Arab Spring" and the subsequent destabilization, violence, and even US armed and backed warfare that followed. While nations like Libya and Tunisia are now run by a BP, Shell, and Total-funded Petroleum Institute chairman and a US NED-funded "activist" respectively, Egypt has managed to ward off and expose the US proxy of choice, Mohammed ElBaradei, who's own movement was forced to denounce him as a Western agent.

By striking at the meddling, seditious NGOs, Egypt seeks to undermine the source of destabilization, the conduit through which US money and support is funneled through to "activists," and expose the true foreign-funded nature of the political division that has gripped the nation for now over a year.

The AP article reports that Egypt's generals have stated, "we face conspiracies hatched against the homeland, whose goal is to undermine the institutions of the Egyptian state and whose aim is to topple the state itself so that chaos reigns and destruction spreads." Clearly, this an accurate observation, not a political ploy, with similar US-hatched conspiracies documented and exposed from Tunisia all the way to Thailand.

Stepping Back from the Brink

Egyptians must step back and examine the obvious fraud behind their "Arab Spring" revolution, as well as ensure that this nationalist streak by the Egyptian military is genuine. All sides presuming ownership over Egypt's destiny must exhibit through policy, programs, and action that they will be serving the Egyptian people, not opening doors to US free trade, bending to the will of Wall Street and London's military ambitions throughout the region, or lending credibility to the West's contrived international institutions.

Egypt's military has made a promising first step by exposing and prosecuting foreign-funded sedition in their country, helping strip the deceitful veneer off of Western NGOs that have long operated with impunity under the cloak of humanitarian concern. Another step could be by showing support for Syria's besieged government, facing similar foreign-funded destabilization and now foreign-funded terrorists vying to overthrow yet another Arab nation and installing a Western proxy regime.

For those in the streets of Egypt who genuinely seek better lives, they would be best served by exposing the foreign-funded frauds amongst them seeking to exploit the well-intentioned, and then developing a program of pragmatism rather than one of politics. Those merely calling for first Mubarak, and now the military to step down and make way for clearly US-backed proxies like ElBaradei and the MI6-creation, the Muslim Brotherhood, are only paving the way for another oppressive regime to lord over them well into the foreseeable future. However, unlike with Mubarak, there will be no foreign aid flowing in to overthrow this new foreign-funded proxy regime, only aid to ensure its endless perpetuation.
Share
‹
›
Home
View web version