"Peace envoy" sits on board with traitors, meddlers, and warmongers.
by Tony Cartalucci

Editor's Note: Brookings has since taken down Middle East Memo #21 - it has been reposted by Land Destroyer here in its entirety.


UPDATE August 3, 2012 - Kofi Annan is also revealed to be a member of JP Morgan's International Council as of 2011. He finds himself amongst duplicitous, scheming, self-serving Western-aligned personalities of all stripes including Khalid Al-Falih of Saudi Aramco, fading Russian oligarch Anatoly Chubais, US war criminal Henry Kissinger, serial financial criminal Jamie Dimon, and convicted war criminal Tony Blair. It should also be noted that the corporate-financier funded International Crisis Group has attempted to purge Annan's name from their website, however it is forever memorialized in their 2012 Annual Report available here (.pdf), and by Land Destroyer upon request.

March 20, 2012 - "U.N.-Arab League envoy" Kofi Annan has claimed over the last several weeks to be backing "peace efforts" in Syria to end the conflict which has lasted over a year now. In reality, it has been revealed that his function is to simply buy time for a collapsing militant front and the creation of NATO-occupied "safe havens" from which further destabilization and "coercive action" can be conducted against the Syrian government.

This has been confirmed by Fortune 500-funded, US foreign-policy think-tank, Brookings Institution which has blueprinted designs for regime change in Libya as well as both Syria and Iran. In their latest report, "Assessing Options for Regime Change" it is stated:

"An alternative is for diplomatic efforts to focus first on how to end the violence and how to gain humanitarian access, as is being done under Annan’s leadership. This may lead to the creation of safe-havens and humanitarian corridors, which would have to be backed by limited military power. This would, of course, fall short of U.S. goals for Syria and could preserve Asad in power. From that starting point, however, it is possible that a broad coalition with the appropriate international mandate could add further coercive action to its efforts." -page 4, Assessing Options for Regime Change, Brookings Institution. 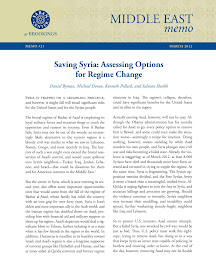 Image: Also out of the Brookings Institution, Middle East Memo #21 "Assessing Options for Regime Change (.pdf)," makes no secret that "responsibility to protect" is but a pretext for long-planned regime change.

While some may be surprised that "peace envoy" Kofi Annan is essentially lying to both Syria's government and to the world, with a complicit UN and "Arab League" willfully "in" on the fraud, Annan's ties with notorious traitors, meddlers, and warmongers indicate that this latest deception is par for the course. 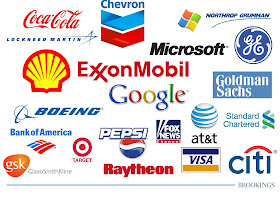 Image: Some of the corporate sponsors behind the Brookings Institution, from whose playbook Kofi Annan is being directed in his disingenuous "peace mission" to Syria. (click image to enlarge) 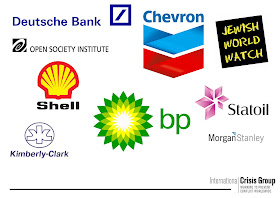 Image: Just some of the corporate and "institutional" sponsors of the International Crisis Group, upon which Kofi Annan sits as a "trustee" with other dubious personalities including George Soros, Zbigniew Brzezinski, Israeli President Shimon Peres, Egypt's Mohammed ElBaradei, and Neo-Cons Richard Armitage and Kenneth Adelman. (click image to enlarge)

It must surely warm the cockles of the Syrian people's hearts to realize Annan, with direct ties to the Neo-Conservative establishment who has long sought Syria's destabilization and the Israel government as well as its financial institutions, is so "concerned" about establishing peace in a conflict where Syrian rebels and foreign militants are turning up with US and Israeli weapons in their hands. It must also warm their hearts to see direct admissions from the Brookings Insitution that Annan's mission is simply to buy time for a faltering foreign-funded rebellion so that it may be preserved and rehabilitated back to full strength under the guise of a "peace deal."

The fact that Egypt's ElBaradei, another foreign-backed subversive traitor, as well as Kenneth Adelman, lobbyist for Wall Street proxy Thaksin Shinwatra of Thailand and member of Eldeman public relations, a sponsor of the US State Department's "Alliance for Youth Movements" who trained equipped and backed the uprising that destabilized Syria to begin with, are involved in ICG's work indicates that the "International Crisis Group" may indeed be attempting to fulfill its mission statement of "preventing and resolving deadly conflict." However, that is with the hidden caveat being the conflicts it seeks to resolve have been created by them and their agents in the first place to justify a series of predetermined "solutions." A case of manufactured problem, corporate-media perception managed reaction, predetermined, self-serving solution.

It then appears, despite the United Nations being stamped upon Annan's efforts, that he is in fact a direct representative of Western geopolitical ambitions, more specifically those of Wall Street and London. It should be mentioned at this time that the International Crisis Group of which Annan serves as a trustee for, is funded by the following corporate-financier interests:

When considering the Brookings Institution's admissions that Annan is simply playing a part in the overall strategy to execute long-planned Western-backed regime change in Syria, and the equally impressive array of corporations, banks, and corporate-funded foundations backing Brookings, it is clear that it is corporate-financier interests, not an "international consensus" that is behind the United Nation's efforts versus Syria. The UN is merely a convenient front lending legitimacy to what is otherwise the naked aggression of foreign military conquest. In fact, the Brrokings Institution admits as much in their report, "Assessing Options for Regime Change," where they declare:

"Taking actions without a UN mandate would also likely only add to the unraveling of the “responsibility to protect” doctrine, in as much as it emphasizes the need for UN-legitimated authority." -page 3, Assessing Options for Regime Change, Brookings Institution.

This of course in the context of outlining the various unilateral actions the US can take to circumvent Russia and China's objections to meddling in Syria's sovereign affairs and in essence render moot its own contrived international legal process, as well as an acknowledgement to the flagrant abuse of the "responsibility to protect" doctrine in regards to Libya. The UN is mentioned throughout the report merely as a mechanism for obtaining US interests in the Middle East, a mere pawn rather than a driving factor behind US involvement or any sort of international "responsibility" the US is "altruistically" fulfilling.

The same can then be said of Annan's function, a mask of legitimacy behind which neo-imperial aggression is being carried out. Already, Annan's efforts are being matched by NATO-member Turkey's preparations to establish the sort of militarily occupied "safe haven" in Syrian territory, prescribed in the Brookings report. It is a plot Annan knowingly works in tandem with US-led NATO - a plot whose final objective is the further violent destabilization and overthrow of the sovereign government of Syria - not peace.
Share
‹
›
Home
View web version